“For I dipt into the future, far as human eye could see, Saw the Vision of the world, and all the wonder that would be; Saw the heavens fill with commerce, argosies of magic sails, Pilots of the purple twilight, dropping down with costly bales”
Extract from Alfred, Lord Tennyson

Limerick Steamship Company (founded in 1893) and Palgrave Murphy Ltd (founded in 1835) were the two leading ship owners, stevedores and agents in Ireland .They merged their interests to form The Hibernian Transport Group in the early 1960’s.
This venture ceased trading in 1970.

ARGOSEA SERVICES LIMITED was formed by six members of the middle management team of Limerick Steamship Company (with over 110 years of maritime experience between them) to provide ship agency in the ports of Limerick, Fenit, Galway, Ballina and Westport to ship owners who had previously been customers of Hibernian Transport Group.

The first customer to sign up to the new venture was Esso and very quickly many other owners appointed Argosea as their agents in the West of Ireland.

In 1972 it was decided to expand into stevedoring and ship agency in the port of Foynes.

Regularly up to 200 men were employed in the loading of cargoes such as Frozen Beef, Bagged Sugar and Moss Peat in bales and the discharging of bulk cargoes like Coal, Fertilizers, Grains and Molasses. 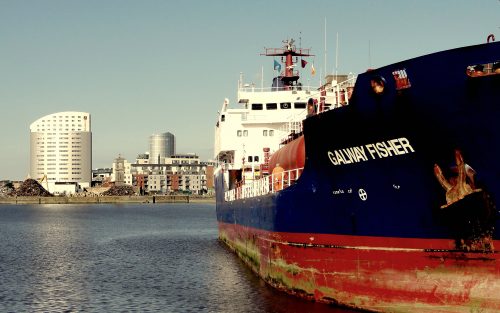 In 1976 Argosea were appointed by Ocean Inchcape to provide agency, stevedoring, warehousing and forwarding services to the new Offshore exploration industry drilling for Oil and Gas off the west coast. All the major Oil and Exploration companies were serviced by Argosea in the ten year period that this business lasted.

With the opening of the giant alumina plant in Aughinish came the appointment of Argosea as agents for Bauxite and Alumina carriers at that port.

In more recent times we are pleased to be actively involved in the renewable energy industry.

To continue to be recognised by our clients and the market, nationally & internationally, as the leading and most progressive shipping services partner in the south of Ireland, renowned for our strong personal service, reliability, expertise and value for money, delivered by a knowledgeable, caring and motivated team.

This website uses cookies to improve your experience while you navigate through the website. Out of these, the cookies that are categorized as necessary are stored on your browser as they are essential for the working of basic functionalities of the website. We also use third-party cookies that help us analyze and understand how you use this website. These cookies will be stored in your browser only with your consent. You also have the option to opt-out of these cookies. But opting out of some of these cookies may affect your browsing experience.
Necessary Always Enabled
Necessary cookies are absolutely essential for the website to function properly. This category only includes cookies that ensures basic functionalities and security features of the website. These cookies do not store any personal information.
Non-necessary
Any cookies that may not be particularly necessary for the website to function and is used specifically to collect user personal data via analytics, ads, other embedded contents are termed as non-necessary cookies. It is mandatory to procure user consent prior to running these cookies on your website.
SAVE & ACCEPT